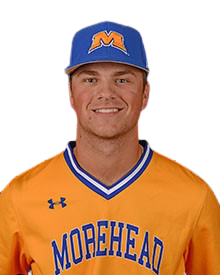 Resides: New Carlisle, IN
Roman Kuntz is an outfielder entering his first year in the Northern League. He played two years at Lake Michigan College, a JUCO school in Benton Harbor, Michigan, where he had a .409 average, with 14 doubles, 4 triples and 10 home runs in 44 games.

During the last two summers, Kuntz played summer ball in the Northwoods League with three different teams. In 2021 with the Battle Creek Bombers and the Wisconsin Woodchucks, Kuntz’s slash line was .345/.440/.496. (average, on-base percentage, slugging.) His batting average ranked #11 in the league.

Going into his sophomore year, Kuntz will be playing his first year at Morehead State University, a Division I school in Morehead, Kentucky.